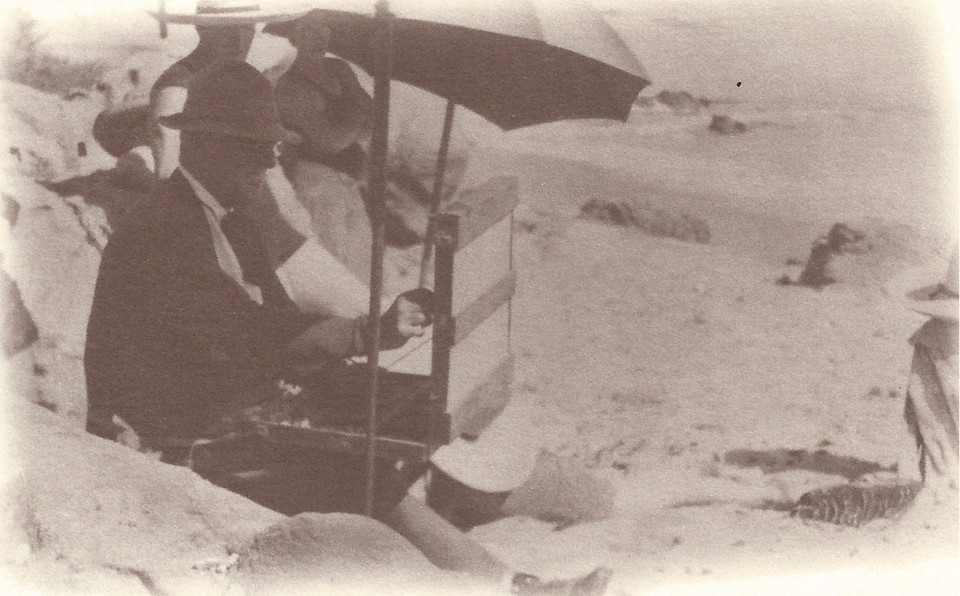 The Laguna Plein Air Painters Association (LPAPA) was founded in Laguna Beach in 1996 with a mission to preserve the history of the plein air movement of 19th century California, to support the tradition as it exists today, and to foster a network among plein air painters nationwide.  LPAPA is considered the stewards of Laguna’s plein air legacy, which established our town as an artists’ colony in 1903.  Early plein air artists founded the original Laguna Beach Art Association and opened the first art gallery in 1918 and started a permanent collection that later established the town’s museum.  LPAPA is committed to continuing the plein air painting tradition and preserving the Laguna Plein Air Painting legacy.

The term “plein air” comes from the French phrase en plein-air which is an idiom that does not translate directly, but simply means “outdoors.”  Similarly, in Italian, the phrase is al fresco, and in Spanish it’s al aire libre.

The custom of working outdoors has been practiced for several hundred years, but it was limited to drawing and watercolor painting, as oil paints were not suited for use outside the studio until the early 1840s, when an American artist named John Rand (1801-1873), patented the collapsible soft-metal paint tube, essentially the system we use today.  This light-weight, airtight container offered artists easy portability and by collapsing part of the tube with each use, the remaining paint stayed fresh and pliable.

The first painters credited with painting en plein-air in a systematic manner were the French artists of the Barbizon School. Originally a small group of Parisian artists who associated around Théodore Rousseau (1812-1867), they broke with French tradition by rejecting the pre-set conventions of the Academic manner that stressed studio painting, even when painting landscapes.  In 1848, Rousseau led the group out of Paris to the Barbizon Forest, where they communed with nature and recorded their experiences by painting en plein air.

Following upon the footsteps of the Barbizon, the French Impressionists became the great popularizers of plein air painting. Their landscapes were distinctive for their natural color and convincing effects of natural light.

It’s often difficult to understand the respect accorded by artists for good natural light.  The distinguished painter of the Sierra Nevada, Edgar Payne (1883-1947), was set to marry artist Elsie Palmer (1884-1971) on the morning of November 9, 1912.  Early that morning, Edgar asked Elsie to contact all their guests and reschedule the wedding for later that afternoon, because “the light was perfect.”  Elsie understood and readily complied.

Perhaps like no other artist, the plein air painter is mesmerized by natural light.  The passion for light drives them to seek the genuine experience and paint it, regardless of climate, weather or natural impediments.  Hence, it is as a plein-air painter that the landscape painter finds the ultimate reason for being, and at the same time, confronts their most rigorous challenge: to capture quickly the brilliant and fluid visual sensation of natural light at a specific time and place while facing the formidable constraint of fleeting natural light.

As early as 1886, plein air painters came to Laguna Beach to paint the clear and intense light that characterizes the sheer natural beauty of our coastal community. These artists, who would become the founders of the California Impressionist Style, included William Wendt, George Garden Symons, Granville Redmond, Franz A. Bischoff, Frank Cuprien, Anna Hills, Donna Schuster and Edgar Payne, among many others.  Norman St. Clair is credited with establishing Laguna Beach as an Artists’ Colony.

In 1918, the artists came together and founded the Laguna Beach Art Association. They secured the small Old Town Hall as their exhibition venue and began holding art exhibitions. Over the next few years, the Laguna Beach Art Association grew to prominence and attracted such noted artists as Maurice Braun, George Brandriff, Benjamin Brown, Joseph Kleitsch, Arthur G. Rider, Guy Rose, and numerous others to participate in programs and exhibitions.

Eventually, the Laguna Beach Art Association outgrew the temporary gallery in the Old Town Hall and a series of exhibitions were held to raise money to purchase a piece of land and construct a permanent gallery space. In 1926, the association purchased a lot on the south-west corner of Coast Highway and Cliff Drive. On February 16, 1929, the association’s new gallery was officially opened to the public. The gallery is still there, but it is now the Laguna Art Museum.

The Laguna Plein Air Painters Association (LPAPA) is considered the steward of Laguna’s artistic legacy and is dedicated to preserving the plein air tradition of painting for future generations.