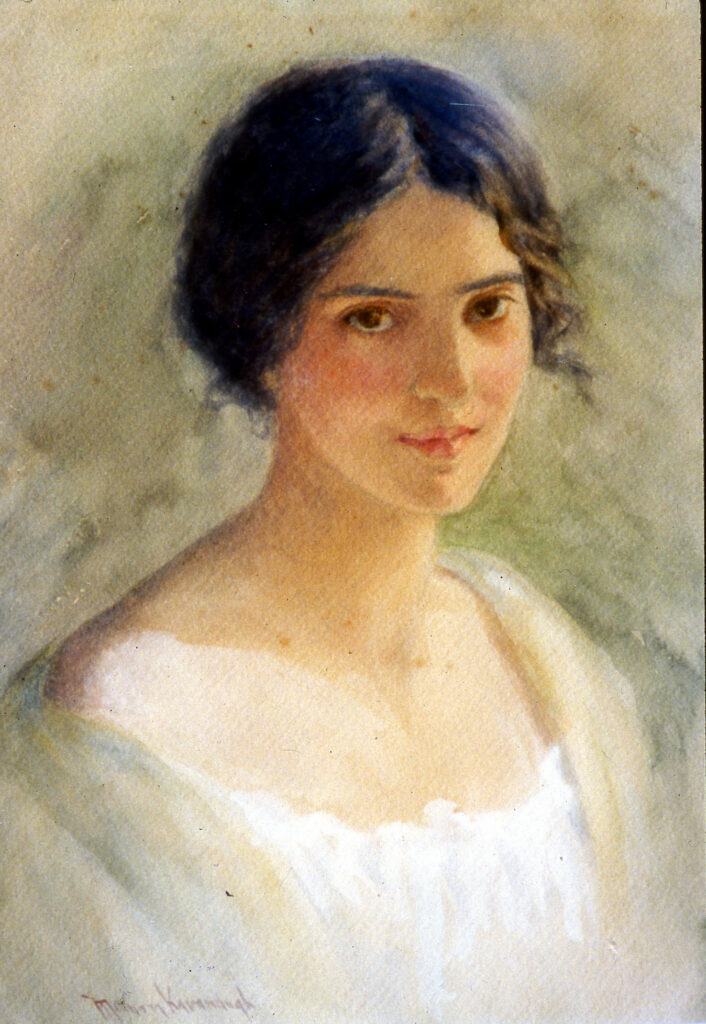 Marion Kavanagh (born Kavanaugh) Wachtel was born on June 10, 1870, in Milwaukee, Wisconsin.  Her parents were James Thomas Kavanaugh and Jane Johnston Kavanaugh.  She was raised in a home that encouraged artistic pursuits, as her mother and her great grandfather, who had been a member of the Royal Academy in London, were artists.

Marion Kavanaugh studied at the Art Institute of Chicago and in New York with William Merritt Chase (1849-1916).  For several years, she taught at the Art Institute and in the Chicago public schools.  By the time she returned to Milwaukee, she had established a reputation for child portraits and figure studies.

In 1903, she won a commission from the Santa Fe Railroad to paint murals in their San Francisco ticket office.  With the benefit of a pass from Santa Fe, she set off to California sketching at every opportunity along the path of the railroad.

Also in 1903, Marion visited the Cooper Ranch in Santa Barbara, and stayed as a guest for a few months.  The Cooper Ranch was owned by Ellwood Cooper (1829-1918), a brilliant agriculturist and horticulturist who published several treatises on California produce.  On his ranch, Cooper grew olives, grapes, English walnuts, European almonds, oranges, lemons and Japanese persimmons.  He was the first farmer in the United States to produce and market olive oil.

Soon after her stay in Santa Barbara, Marion travelled to San Francisco.  In October, 1903, she showed several of her watercolors at the home of Mrs. Oscar K. Cushing.  The show consisted of landscapes painted in and around Santa Barbara and the Cooper Ranch, as well as a series of small portraits, all in watercolor.  The display was reviewed in the San Francisco Chronicle of Monday, October 19, 1903.  In all, the show was well received, and the writer stated that “She handles watercolors in a free, fearless way, more like a man than a woman.”

Once in San Francisco, she familiarized herself with the city by visiting art studios and galleries.  It has been often stated that Marion met and took classes with William Keith (1838-1911), and that Keith introduced her to his friend Elmer Wachtel (1864-1929), who lived in Los Angeles.  Unfortunately, there are no extant sources to verify these two events.  By contrast, there is no doubt that Keith and Elmer Wachtel were indeed friends, as Elmer had studied with Keith in San Francisco between 1892 and 1894.

Whatever it was that brought Marion Kavanaugh and Elmer Wachtel together, the two artists fell in love and were married in Chicago in 1904.  Thereafter she signed her name “Marion Kavanagh Wachtel.”

Returning to Los Angeles, the couple built a studio-home in the Mt. Washington area.  They remained there until 1921 when they moved to the Arroyo Seco area of Pasadena.  As inseparable painting companions, they traveled throughout Southern California and the Southwest.  Originally trained as a portrait artist, Wachtel painted portraits of the Hopi on a trip to Northern Arizona and New Mexico in 1908.

Perhaps so as not to compete with her husband who favored oil painting, Marion worked primarily in watercolor throughout their marriage.  She earned a reputation as one of the very best watercolorists in California.  Her paintings display remarkable dexterity in the handling of the medium, which could be quite unforgiving even to the most skilled.  She received high praise for her works, as delicate, lyrical interpretations of the landscape, in a manner that showed her masterful control of tone and color.

Still, at all times, Marion was a great artist, showing a studied approach to the sensitive character of natural light and a love for elegant forms.  She was popular on both coasts and exhibited in New York as well as California.  She was elected to the New York Water Color Club in 1911, was elected an associate of the American Water Color Society in 1912, and was a founding member of the California Water Color Society in 1921.  She also held memberships in the Pasadena Society of Artists and the Academy of Western Painters.  Her works were exhibited jointly with her husband’s as well as in solo exhibitions in Los Angeles.  One-person exhibitions of her paintings were held at the Los Angeles Museum of History, Science, and Art in 1915 and 1917.

After her husband’s death in 1929, Marion Wachtel temporarily lost interest in painting.  She resumed working around 1931, painting landscapes around her home on the Arroyo Seco, the foothills of the San Gabriel Mountains, and several views of the Sierra Nevada Mountains, many of which are done in oil paint.  Marion Wachtel died at home in Pasadena on May 22, 1954.