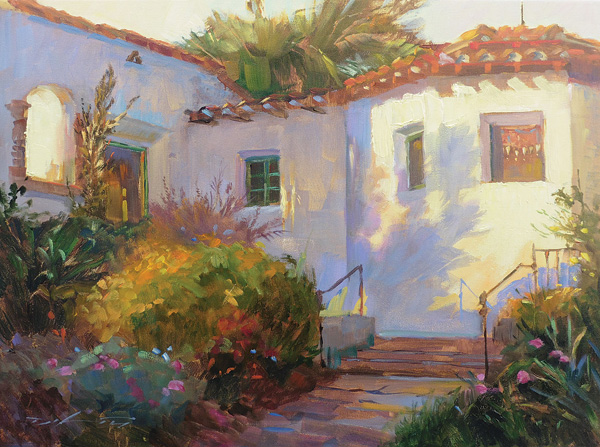 In a world where so many eyes are glued to smartphones and other high-tech gadgets, Rick J. Delanty seeks to show us something different — something better — beyond the temporal world and its digital distractions. The California native has been painting landscapes and seascapes for more than 40 years, and his acrylics and oils depict some of the most striking sights on our planet. But for Delanty, his paintings aren’t simply representations of the here and now. In nature, he sees the reflection of “a more perfect eternal reality.”

“The goal is to indicate a world and place that is better even than the one we have here,” says Delanty. The self-described contemporary impressionist says he listens to his intuition, feelings, and spirituality as he paints, and he uses expressive brushwork and color to convey his emotional response to the mood and atmosphere of a landscape. “If the viewer sees that—if the viewer sees something else in the work that isn’t just an observation or recording of what’s there, if they see that I’ve felt something that they also can feel—to me that’s total victory,” he says.
Delanty worked as a high-school art educator for 32 years before settling into life as a full-time painter 10 years ago. His career is peppered with repeat invitations to prestigious plein-air competitions and acceptance into national juried exhibitions. This year, his painting SEAWALL was one of 140 works—and the only acrylic—juried into the American Impressionist Society’s 17th annual exhibition.

“Composition and value are rock bottom to having a successful image,” says the plein-air artist, who also works in his studio but always begins outdoors with drawings and value studies. Delanty has painted many landmarks around his hometown of San Clemente, CA, but he also journeys across the West and to farther corners of the world to paint. “I’m looking for God’s creation in my hometown, in the mountains, near streams, and across oceans,” he says. “I believe it’s in all of those places, and if I don’t see it, it just means I’m not looking.” —Kim Agricola